Link to PDF of this report: https://drive.google.com/file/d/1jreCq4Il5PePyV8O2LNqczQRTYaE6Uzu/view?usp=sharing

At various times Tim Walberg has claimed that his Father, John A. Walberg was either:
·     An “Anchor Baby”
·     A “DACA kid”
·     Or that his Father immigrated from Sweden with his Grandparents.

Tim Walberg has also claimed multiple times that he is:
·     A “first-generation American citizen”

Public records show that all four of Walberg’s claims are false. Census records show Tim Walberg’s Grandmother, Alma Walberg (maiden surname: Larson) indeed immigrated from Sweden in 1889. She became a US citizen in 1901. Tim Walberg’s Father was born in Illinois in 1907. Therefore, neither term, “Anchor Baby” or “DACA” have any bearing to the story of Tim Walberg’s immigrant ancestors.

There is no basis for Tim Walberg to claim that his Father immigrated to the U.S. with his Grandparents. He cannot claim ignorance of that fact either, otherwise he would not have stated such a falsehood so many times with such confidence. Furthermore, with his other statements about his Father having been an “Anchor Baby”, Tim Walberg demonstrates a willingness to lie about his family’s citizenship. His use of terms “DACA kid” and “Anchor Baby” are together callous and contradictory. Either Tim Walberg is ignorant of those issues, or he does not take them seriously enough to represent them accurately.

Tim Walberg’s job is to Represent. The public entrusts him to make powerful, consequential decisions over issues such as the fate and well-being of other migrants to this country. By lying about his own family’s migrant story, Tim Walberg fundamentally fails as a Representative.

“Anchor Baby”: an insulting term for a child born to a non-citizen mother in a country that grants automatic citizenship to children born on its soil.

DACA:(Deferred Action for Childhood Arrivals), A contested immigration policy granting legal status to non-citizen applicants who were brought to the country undocumented as children.

First-Generation American Citizen: A person who has either been naturalized as an American citizen, or the child of that person. 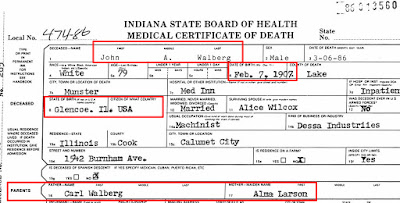 Official Death Certificate (above) shows Tim Walberg’s Father was born in the US, not “brought over” 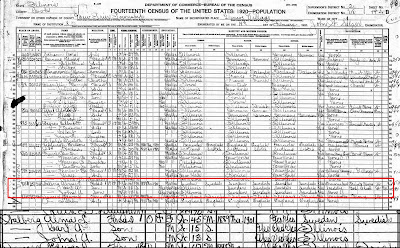 The 1920 US Census, Illinois (above) shows Tim Walberg’s Grandmother arrived in 1889 from Sweden, attained US Citizenship in 1901. His father was born in Illinois in 1907. So terms like DACA and “Anchor Baby” have no bearing on their actual citizenship statuses. Why does Tim Walberg keep using those terms, falsifying the history of his own Father and Grandmother?

2 - Walberg Claiming that his Father Immigrated to the U.S.

3 - Walberg Claiming that his Father Immigrated to the U.S.

4 - Walberg Claiming that his Father Immigrated to the U.S.

5 - Walberg Claiming that his Father Immigrated to the U.S.


6 - Walberg Claiming that his Father Immigrated to the U.S.


7 - Walberg Claiming that his Father Immigrated to the U.S.

See Walberg’s Reagan quote on the next page. I cannot find any Reagan quotes that resemble what Walberg has been attributing to Reagan at countless events for almost a decade.

2 - Walberg referring to his Father as an “Anchor Baby”

Excerpt of Felipe Calderón’s address to U.S. Congress (Thursday, May 20, 2010):
“My Government does not favor the breaking of the rules. I fully respect the right of any country to enact and enforce its own laws … I want to recognize the hard work and leadership of many of you in the Senate and in the House, and of President Obama, who are determined to find responsible and objective answers to this issue. I am convinced that a comprehensive immigration reform is also crucial to securing our common border. However, I strongly disagree with your recently adopted law in Arizona. It is a law that not only ignores the reality that cannot be erased by decree, but also introduces a terrible idea: using racial profiling as a basis for law enforcement. And that is why I agree, I agree with President who said the new law carries a great amount of risk when core values that we all care about are breached.”

3 - Walberg referring to his Father as an “Anchor Baby”

4 - Walberg referring to his Father as an “Anchor Baby”

Walberg instantly contradicted himself from one sentence to the next. He said that his father came over from Sweden, and in the next sentence, that his father was born shortly after his Grandparents arrived. Walberg’s father was born in 1907, and according to the 1920 census Walberg’s Grandmother came over in 1889. She would have been a young teen at the time she immigrated. She lived in this country for 18 years, and attained citizenship before she gave birth to Walberg’s father.

I’m not sure what point Walberg was trying to make with the 14th Amendment if not to suggest that the children of immigrants should not have the same constitutional rights as the children of slaves. He trailed off mid-sentence. I would like to ask him to clarify whatever he was suggesting there.
at July 20, 2018