Link to nicely formatted, printable PDF of this report: https://drive.google.com/file/d/1gobmrvwLayut_IPKufPzjfxK7QjBG6co/view?usp=sharing


Less than a month and a half after taking the office of President, in the pre-dawn hours of a Saturday, Donald Trump released this official White House statement to the world: 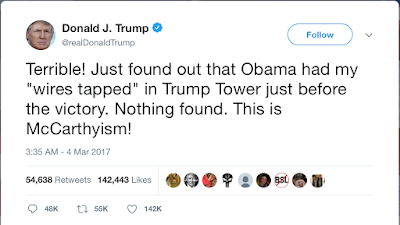 An alarming official statement from the new White House administration

To this day, there are still no substantiations for Trump’s allegations in that official White House message. Except, when people with legislative power make harsh, unsubstantiated rumors about people with no legislative power, who are perceived to be political opponents – That is very much McCarthyism in a nutshell.

Just as Walberg hoped, I heard his answer. And I thought it sounded perfectly reasonable. If I had been at the event, I would have applauded Walberg’s response as well. At that point, it had been two months since Donald Trump had made those allegations, and he had still not given any supportive evidence for them. Nor explained how he had been informed of such a thing, and why he associated all of it with McCarthyism.

What was Walberg talking about when he said: “with all the evidence that is coming out now”? It has been eight months now since Walberg said that. At the time, and ever since, I have not found any evidence that indicated that Obama ordered a wiretapping of Trump. Walberg was not referring to classified evidence either, because he referred to it several times in that interview as evidence “coming out now”, and “what we’re seeing rolled out before us now”. Those are not descriptions used for classified evidence.

Again, what was Walberg referring to? Something provoked Walberg to flip-flop from a very confident opinion that he had eight months prior to that. And when he told us that position, which was contrary to the one Trump espoused, Walberg said that he hoped that we had heard it. 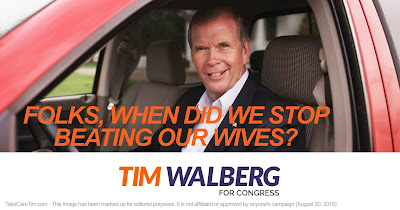 Update: Walberg Lying that his Father Immigrated to U.S.

This report expands on my report from July 20 about Walberg falsely claiming that his Father immigrated to the U.S., and also referring to him as an "Anchor Baby".
http://www.takecaretim.com/2018/07/tim-walberg-has-lied-about-his-father_19.html

Link to full updated and formatted PDF with all of Walberg's claims:
https://drive.google.com/file/d/1IGgyRJGQryRvCMRTFPrFa6QZ-jna5ne-/view?usp=sharing

Logo for the lobby group

U.S. English is a lobby group with endorsement videos only from white, mostly GOP Congress members such as Steve King (IA-05), Dana Rohrabacher (CA-46), Jim Jordan (OH-04), Bob Goodlatte (VA-06), and former Congress member Tom Price (GA-06). It seems like the initiative would smack in the face of the first amendment clause: “Freedom of Speech”. How would that initiative be anything but Congress putting limits and regulations on our speech?

Note: There is an apparent contradiction here when Walberg says that his family came to the U.S. with only a desire to be American, when the previous month, he claimed that they came with stone masonry skills, and he said that we need immigrants with ready skills to immediately benefit the country.

Walberg specifically claimed that his immigrant ancestors were stone masons who worked on Chicago’s Wrigley Building, and also helped to shape the city’s skyline. I have some substantial reasons to doubt that claim, but I am still following some leads on that. I will explore those claims further in a later report.

Walberg referring to his Father as an “Anchor Baby”