Note: This report was initially posted earlier today as a Twitter thread (@TakeCareTim), as a series of 280-character-limit parts, and is presented here in the same way. 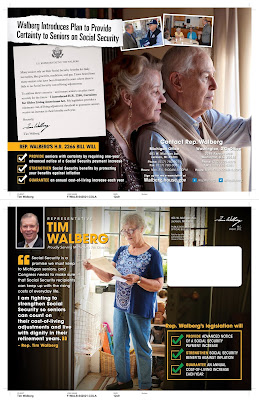 Lots to say about @RepWalberg’s new 12”x9” tax-funded mass mailer. It’s big, expensive & flashy for a bill he introduced & evidently doesn’t care about. HR 2266 is similar to last term’s HR 7765. Walberg delivered no speeches & had zero cosponsors on either bill. 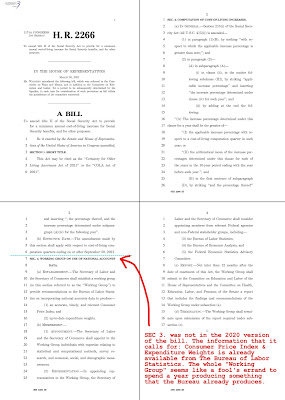 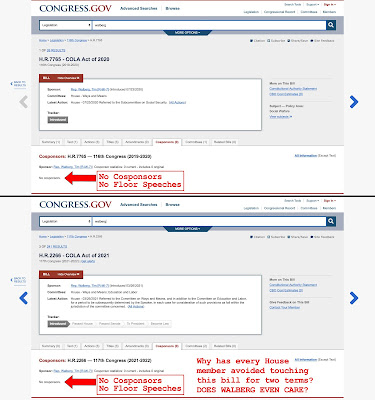 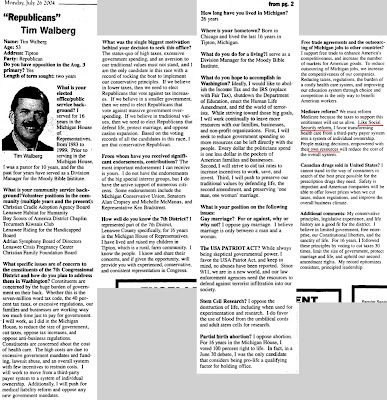 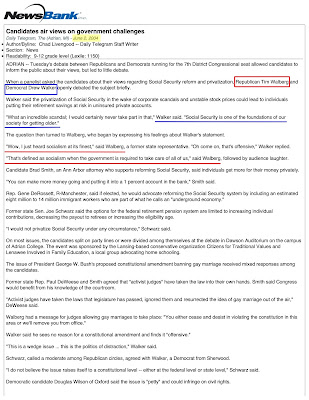 During his losing 2004 campaign, @RepWalberg was open with his hostile feelings about Social Security. He called it Socialism, big government dependency, & proposed privatizing it. After realizing that’s a literal losing message, he cloaked those intentions & won. 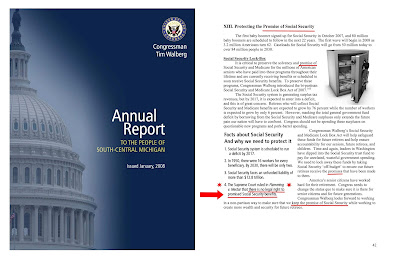 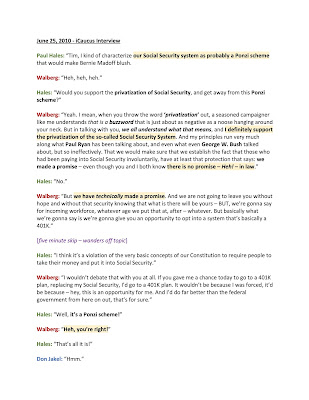 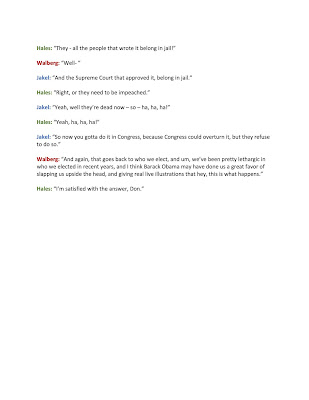 Walberg’s cloak sometimes slips, such as 2010 iCaucus interview where he called for Social Security privatization, that it’s a Ponzi Scheme, & said there are no legal “promised” benefits. Audio (10:30 mark): https://soundcloud.com/mi07rawfootage/walberg-icaucus-interview 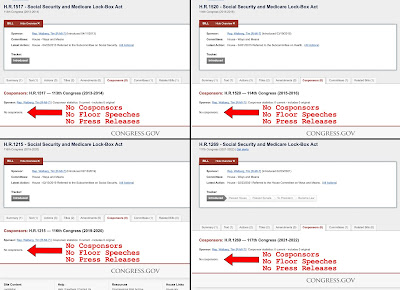 2nd way @RepWalberg cloaks hostility is to introduce nice-sounding, but toxic bills such as, “Social Security & Medicare Lock-Box Act”. Zero other members have cosponsored that bill in four of the Congressional terms that Walberg has introduced it. 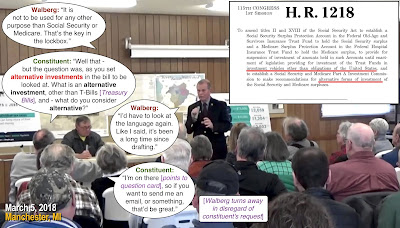 At a town hall, when a constituent asked about specifics of that Lock-Box bill that @RepWalberg authored & reintroduced every Congressional term for a decade, Walberg failed to explain what his own legislation says. Video: https://www.youtube.com/watch?v=8wq9X8hW39g 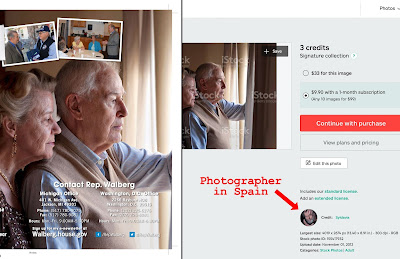 In @RepWalberg’s new mailer about U.S. Social Security, the stock photos were both from Europe: Spain & The U.K. One of which was a composite where the head and body of the U.K. woman were taken from different photos. 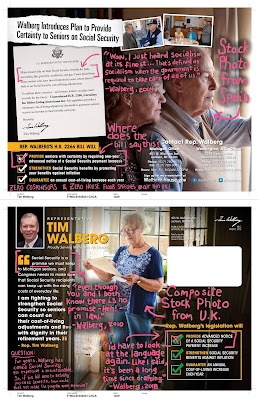 Some claims @RepWalberg makes about his bill in the mailer are not evident in the bill itself, particularly with “requiring one-year advance notice” of payment increases. Overall, I think it is cruel how misleading Walberg is with this mailer.

Video: https://youtu.be/uRVciDnnuqk
Tim Walberg, in his own words: "I don't support democracy." He said that on Tuesday, May 4, 2021, at a town hall in Temperance, MI, which was not publicly announced. The only constituents who were notified were Walberg's supporters, who were mailed invitations (exhibit below, from House mass comms disclosure). 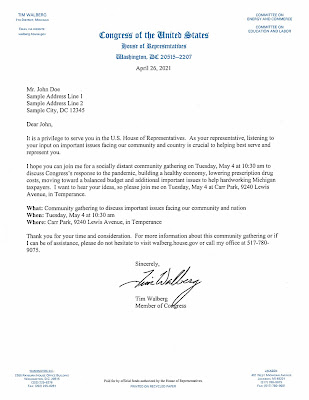 On Friday, April 30, 2021, Walberg called into WKHM radio (link to audio below), and told host, Greg O'Connor how excited he was about the GOP retreat that weekend in Florida, especially because of the lax COVID safety measures. At the end of the call, Walberg said that he would be having a couple town halls in the District next week, but he did not mention any details about them.
Audio (10:40 mark): https://www.wkhm.com/episode/area-congressman-tim-walberg-7/
On Monday morning, May 3, 2021, I called the District office, and asked the staffer for details about the town halls that Walberg talked about on the radio on Friday. The staffer asked me where I lived, and then they only told me the details about the town hall in Temperance (Monroe County), on Tuesday. I asked about the other town halls, because Walberg said on the radio that there would be a "couple". The staffer refused to tell me any more. So I shared the details about what I knew online, and to The Monroe News, and I asked them to record the event, which they did. That same day, one of my friends in Eaton County called the district office, and asked about town halls near them, and the staffer said that there would not be any town halls in Eaton County. On Friday, May 7, 2021, Walberg did have a town hall in Charlotte (Eaton County), so Walberg's staff lied to that constituent, and shut them out of that town hall.
That same Monday, another constituent who lives right near the border of Jackson and Washtenaw Counties called with the same question about town halls nearby to them, and the staffer told them no. On Wednesday, May 5, 2021, Walberg did have a town hall in Grass Lake, which is right near the border of Jackson and Washtenaw Counties, near that constituent. That constituent shared that account with Eclectablog, here: https://www.eclectablog.com/2021/05/why-is-gop-congressman-tim-walberg-hiding-from-his-constituents.html
Since I was able to spread the word about that town hall on May 4, there were some attendees there who asked Walberg tough questions. One of them was Paul (featured in the video), who asked Walberg about not announcing his town halls. Walberg claimed it was due to safety, which is doubtful because moments later that day, Walberg made jokes about the security around the Capitol, and members being, "allegedly vaccinated" to Bedford Township Supervisor, Paul Pirrone (exhibit below): 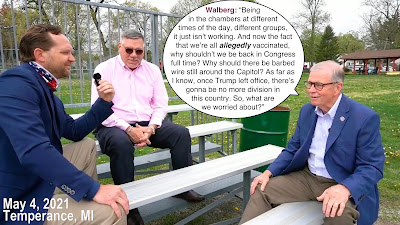 Also, if Walberg cared about following safety protocols, then he would properly wear a mask in airports, which he has routinely been caught not doing (exhibit below). 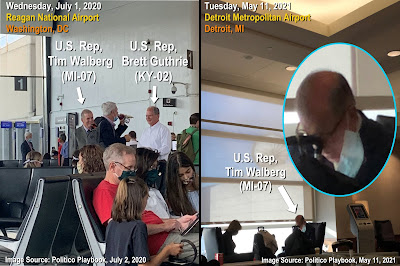 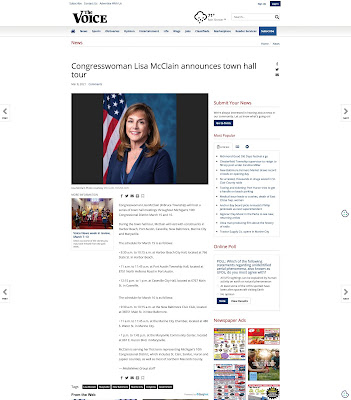 Lastly, if Walberg actually did enjoy doing town halls, and safety was his only concern, then there would be no issue with:
Nearly every other Michigan Congress Member does do those three things (exhibit below), in accordance with supporting democracy: 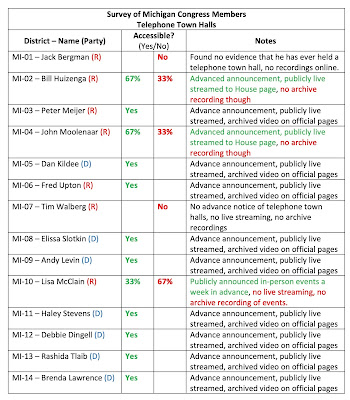