I got this web domain a year ago, and have renewed it today.

Thank you to everyone who has taken the time to read through these reports.

I still have a lot of reports in the works.

I feel both a sense of urgency to share the things that I find in my research, as well as a sense to do so in the most responsible, diligent way possible.

I have gathered a big backlog of material, that I am still sorting through.

Currently, I have numerous drafts of reports that have felt very close to finished, but then little hanging details in them open new doors to whole new lines of research.

Before I ever thought of starting this site, I spent a year working on that one report about Walberg's college credentials. I didn't know where that research was going, or what I would end up doing with all of it, but I felt a personal need to do it. I kept following through on those research trails, checked, and organized everything before I ever finished it and posted it here. All of the research I gathered while looking into that one topic of Walberg's college credentials turned into the other reports that I wrote last year, and into reports that I am still working on.

On April 23, 2019, at the Coffee Hour in Chelsea, Walberg responded negatively to that report of his college credentials:

I was not at that coffee hour in Chelsea. That happened right on the heels of the Manchester, coffee hour, on April 8, 2019, which I was also not at, where Walberg cited me and my report on his father's citizenship. I ended up writing a whole new report about that incident:

I was able to put out that Manchester response so quickly because it was part of the ongoing backlog of material that I had already gathered. I don't have any backlog of material on Walberg's college credentials though. Everything I could possibly find was in that original report. So, responding to what Walberg said at that Chelsea Coffee Hour didn't really warrant a new report.

- To now find myself, as a private constituent of Walberg's, in a position to say:

My US Congressman's criticism of me and my work, at his recent government town hall, does not warrant a response from me.

That's how it is though. I said what I had to in that original report, and I stand by it.

That's where I'm at now. That's the biggest change this new term: how my work has become something of a known blip throughout our District. While I'm still a private constituent, I'm proud of who I am, and the research and reports I've produced here. I do this work seriously, and as responsibly as I possibly can.

I have a lot more reports on the way.

Video: Walberg Lies To Us about his College Credentials 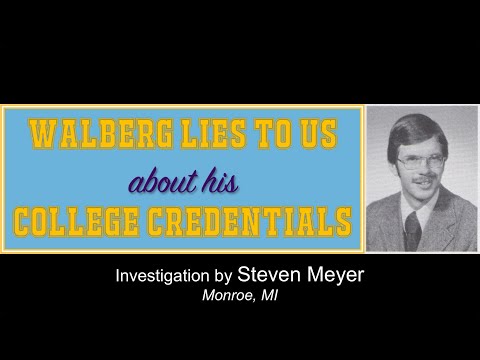