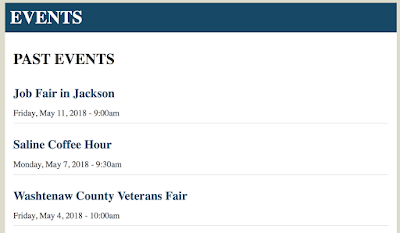 3. How does Walberg select which people will receive advance notice of his Coffee Hours? I have put in multiple requests to his office to let me know about upcoming Town Halls, and to participate in Tele-Town halls. I've never received any notice from his office about any Town Halls, or any opportunity to participate in a tele-town hall. Some people receive letters in the mail about them. I ran across this article in the Manchester Mirror, that described the people as "supporters" who received advance early notice letters in the mail about Walberg's Coffee Hour in Manchester in March earlier in the year. How does Walberg distinguish his supporters from any other constituent? Is Walberg using his campaign lists to send out these letters to supporters from his Government Office? 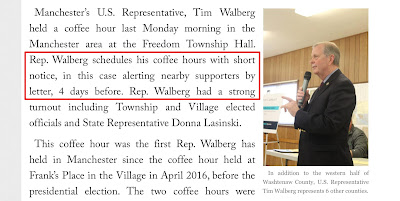 Link to Article: http://themanchestermirror.com/2018/03/12/u-s-representative-tim-walberg-holds-manchester-coffee-hour/
at August 07, 2018