On June 25, 2020, our congress member, Tim Walberg delivered a racist, white nationalism rallying cry from the floor of the US Capitol (see video above). The objective of Walberg’s speech was to delegitimize the ongoing protests against police brutality and systemic racism, and to smear the protesters as un-American. At first, Walberg did contend that there was, “a bad cop” - singular, who murdered George Floyd, though failed mention the other three cops holding Floyd down and standing guard against the pleas of citizen eyewitnesses. Walberg also failed to acknowledge any of the other recent brutality from police against unarmed, vulnerable black citizens, such as Breonna Taylor, an emergency medic who was shot to death while asleep in her bed at home on March 13, after police barged in unannounced, and then lied in their filing about the incident. Walberg certainly did not acknowledge any systemic problem. Rather, Walberg spent the rest of the speech referring to protesters as, “evil”, “punks”, and “warlords”.

Walberg’s speech established an “Us” and “Them” dynamic, between himself and the protesters. Walberg claims an in-group ownership over the history of George Washington, Theodore Roosevelt, and Ulysses Grant. Walberg denies the protesters any claim, as fellow Americans with regard to those historical figures. Essentially it is, “Our History” – Not Theirs. As Walberg said verbatim:

“Their goal is to literally tear down and destroy our history and freedoms.”

Walberg exhibited much more concern about the vandalism of statues in the protests, than the purpose behind the protests. The damage of statues by protesters is not as Walberg said, “an attack on America”, or our freedoms, and it does not “destroy” history. Statues are subjective artworks, and certainly have value but not as histories of their subjects. History is based on primary historical sources. As subjective works of art, statues inform us more about the artist and the time of their crafting. Most statues are not contemporaneous to their subjects.

The bingo card featured in the video is comprised of racist “dog whistle” quotes from Walberg’s speech, and terms that he has used elsewhere over the years, as well as related White Nationalist phrases. The term “dog whistle” refers to the veneer of decorum that white supremacists such as David Duke and Stephen Miller use to soften their racist messages, in order to blend in with mainstream social circles that would typically reject such messages in a more explicitly racist form. Walberg’s use of these racist dog whistle terms sends a message of solidarity that is heard clearly by white nationalists, whether Walberg accepts the affiliation, or not. That is why the Proud Boys gang stood outside of Walberg’s office flashing ‘white power’ hand signals while holding a sign saying, “THANKS TIM AND TRUMP” (exhibit below). 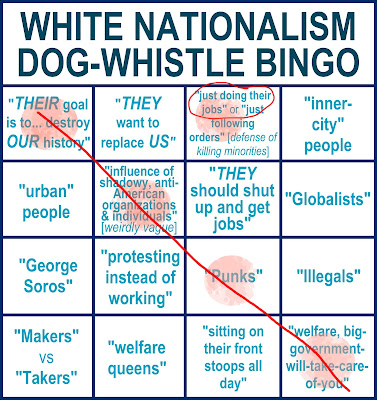 
Tim Walberg will object to being publicly identified as a White Nationalist, but his entire political career is built around White Nationalist tenets. During his first term in Michigan state legislature, Walberg was one of only three legislators that opposed enacting Martin Luther King Jr. Day, as a public holiday (SB 528, January 17, 1984). Walberg supports mandating English as the one official language of the U.S. despite the inherent First Amendment violation. Walberg consistently receives among the lowest legislator ratings from civil rights justice groups, including ACLU and NAACP. On August 14, 2017, I called Walberg’s office to ask why the Congressman was being silent throughout the weekend about the horrors we saw from white supremacists in Charlottesville, Virginia, and Walberg’s staff replied that just that moment, he had issued a Tweet about it. So, I replied, “Is that it?” Well, take that racists! You sure don’t want Congressman Walberg to exercise the power of his office to tweet out another long-delayed, generalized condemnation about racism, and thereafter brush his hands of the whole matter! On August 7, 2019, I asked Walberg if it bothered him to see all of the Confederate flags on display throughout our District. Walberg called that, “a total loaded question” and didn’t answer it, but Walberg did tell me that Stonewall Jackson and Robert E. Lee were, “great Americans” (link to video in the Appendix), so based on that, the inference would be that Walberg is quite proud to see at all of Confederate Flags displayed throughout our District, in tribute the traitors he calls, “great Americans”. Tim Walberg has never done anything to distance himself from the most extreme, explicitly racist White Nationalists in federal office, such as Steve King and Donald Trump.

If Tim Walberg objects to being identified as a white nationalist, then he should affirm so through deed and legislation to distance himself from the affiliation. I would happily support Walberg if he ever decided reject the affiliation through legislative action. In the meantime, Walberg voted against the House’s, George Floyd Justice in Policing Act (H.R. 7120), and Walberg’s July 25 speech affirms his continued solidarity with white nationalists.

APPENDIX: Background on Some of the other Terms used on the Bingo Card

·      “They Want to Replace US”: My October 28, 2018 report cited Walberg’s nativist-extremist conspiracy about immigrants, “replacing” people like him. That report also has an example of Walberg using the slur, “illegals” for migrants.

Link to report from 2018:
https://www.takecaretim.com/2018/10/update-walberg-lied-about-his-fathers.html

·      “Globalist”: is not necessarily an anti-Semitic dog whistle term. Depending on the context, its intent becomes clear. Walberg did not say, “globalists” in his June 25th speech, but his descriptions of powerful, “shadowy” anti-American influencers, is a signature of anti-Semitic narratives for white nationalists to distinguish themselves from, “globalists”.

·      “George Soros”: Is a target for White Nationalists and anti-Semites, and Walberg constantly maligns him as some kind of supervillain who has stealthy occult powers to hide his maneuverings from apparently everyone but Walberg, and other bigots. The innuendo of “shadowy, anti-American organizations and individuals”, were placeholders where Walberg usually names Antifa and George Soros, as he did in the July 5 call in the following paragraph. The narrative that Walberg grafted on Soros is essentially from the vile anti-Semitic pamphlet, The Protocols of the Elders of Zion. The pamphlet was created as a hoax in Russia in 1903, and has been used to smear Jewish people for the past century all around the world.

During a June 5 call-in to the Delaney in the Morning radio show, Walberg explicitly named George Soros, and accused him on the basis of nothing, of funding Antifa.

Walberg: “This is not America, so it has to be dealt with, but it’s not America to tear down our cities, to go in and loot indiscriminately, to bust up stores and windows, to steal and rob, and those people, I’m not sure they even know what they’re doing that for except this is a chance for mayhem. And I’m sure Antifa is in on it, and there’s no way to corroborate that, unless you’re an FBI agent. But knowing what’s gone on in the past, Antifa’s involved with it as well, and I wouldn’t be surprised if George Soros is paying for a lot of what’s going on. Nonetheless, America’s too strong to continue to let this happen.”

Coda/Reminder: Tim Walberg has a lot of power to make enormously consequential decisions that directly affect millions of real people’s lives in our country and around the world. In a few months, we have the power to vote him out.
at July 12, 2020