Link to formatted, printable pdf of this report: https://drive.google.com/file/d/1ce7e_TiIFfyd2Giaik3XqD4vlI-362fd/view?usp=sharing

Tim Walberg presents his positions as though they are aligned with our country’s traditional values and foundational principles. He often supports his stances with words attributed to American luminaries like George Washington, Abraham Lincoln, and others. More often than not, those quotes turn out to be false.

Contents:
I - George Washington & John Adams:
Walberg maligned the words of Adams and misattributed them to Washington

II - Thomas Jefferson:
Walberg fell for a phrase that is commonly misattributed to Jefferson

III - Abraham Lincoln:
Walberg maligned a Lincoln quote at a Lincoln Day event, & printed a campaign ad with it

VI -RonaldReagan:
Features three of Walberg’s false Reagan quotes, & research into the origin of one of them

George Washington did not say those things. The closest quote, was from John Adams [above]. Note Adams’ point in the preceding sentence, defining the opposite of moral and religious qualities as, “Avarice, ambition, revenge, or gallantry…” *. Which speaks more about people’s moral and religious civic behavior, rather than as Walberg’s said, being, “…governed by God”. Walberg’s words sound more like a despotic theocracy, than our country with the First Amendment.

*Note: Some sources show, “... and licentiousness” instead of,“… or gallantry”. That makes sense, because licentiousness is a worse behavior than gallantry. 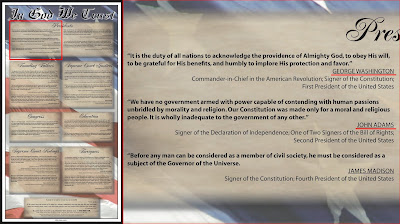 There are two reasons why this Hobby Lobby ad is the likely source for where Walberg read it, and got it mixed up between Washington and Adams:
1)   The ad features Washington’s name directly above the Adams quote.
2)    Walberg also recited a maligned version of Washington’s quote from the Hobby Lobby ad at the July 9thEaton Rapids event.

Note that there are major errors all throughout this Hobby Lobby ad. For one, the Adams quote was shown to begin mid-sentence. Secondly, an entire sentence was deleted from the middle of Adams’ quote in the Hobby Lobby ad.

Other websites have taken the trouble to go line-by-line through these Hobby Lobby ads, explaining all of the falsehoods throughout them. However, in this report, I am primarily focused on Walberg’s errors.

Anna Berkes, a Monticello staff research librarian at the Jefferson Library, has done a thorough analysis showing how this quote falsely became attributed to Thomas Jefferson.

She found that the earliest known documented version of the quote from John Philpot Curren, in Dublin, Ireland on July 10, 1790: “The condition upon which God hath given liberty to man is eternal vigilance.”

Walberg recited and made an ad with a false Lincoln quote. The actual Lincoln quote is so much more eloquent and stirring than the blunt false one that Walberg attributed to him.

Theodore Roosevelt never said such a thing. It was Franklin D. Roosevelt who wrote in, “Letter to all State Governors on a Uniform Soil Conservation Law”, on February 26, 1937, which contained this line, “The Nation that destroys its soil destroys itself.”

Note Walberg’s, “…sign the guest book” line which will be repeated at later events.

There are two distinct quotes here. I searched for both through numerous Reagan archives:
1)    “Gates… swing wide and free…”
I found nothing even close to this one. Walberg has never recited it the same way twice, so I have searched for it with different keywords. I believe it is totally bogus.
2)    “A nation without borders…”

We will explore the second quote further down.

Walberg used to say that, “…sign the guest book” line as a personal addendum to punctuate the bogus Reagan quote, and now Walberg misattributes the entire thing to Reagan!

Also note: How Walberg thinks our government, “ought to mandate” matters of love.

The earliest source of the quote that I could find was from columnist, Michelle Malkin: 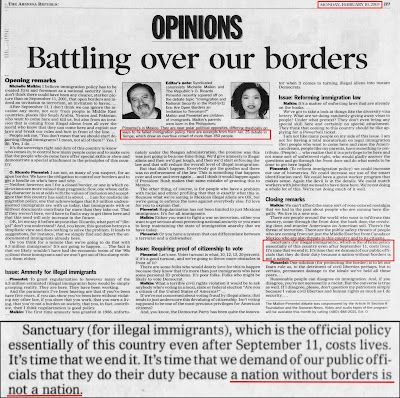 Article about the debate, The Arizona Republic, February 10, 2003

Malkin did not attribute the line to anybody. I am not certain if she originated it in that debate. I have found accounts that she received strong applause, when she said the line.

Following the debate with Michelle Malkin, the line started appearing in several other editorials. Those articles either did not attribute the line to anyone, or used vague references, like, “It was once said…”. Then in late-2005, ads started appearing, and a website was launched for the Mississippi chapter of the F.I.R.E. Coalition, both of which falsely attributed the quote to Ronald Reagan. The F.I.R.E. Coalition was recognized by the SPLC as a nativist extremist group. Soon after a series of these ads ran, the quote started appearing in more articles and blogs which also falsely attributed it to Ronald Reagan. 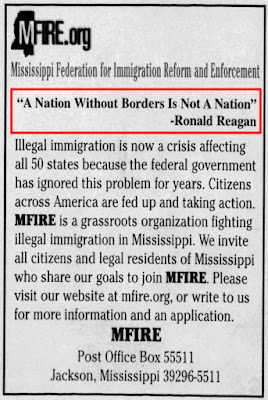 In 2006, Mike Pence used to recite the phrase a lot during his campaign for U.S. Congress, and he never attributed it to anybody. Ten years later, during the Vice-Presidential debate, Pence recited it again, but this time, he falsely attributed it to Reagan. Mike Pence must have known better. 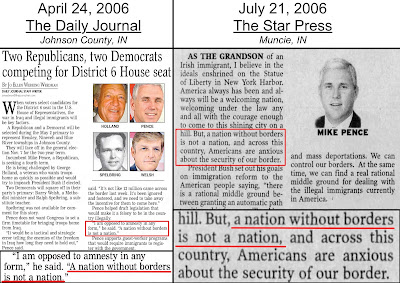 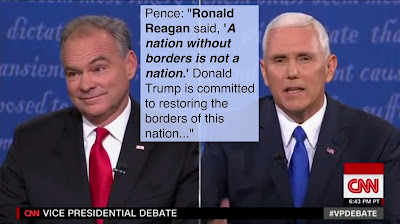 Today, the top search result for the origin of this quote is this Café Press store. Since 2008, under the store’s logo and slogan evoking domestic violence, items with the bogus Reagan quote are for sale alongside Anti-Global Warming and Anti-U.N. merchandise. 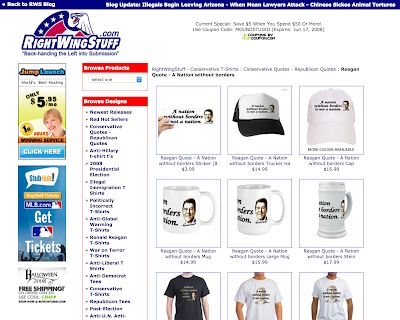 After 2008, the quote and its attribution to Ronald Reagan started appearing all over the place. The earliest Twitter post of it was on April 10, 2009, and the earliest Facebook post of it was on March 10, 2010. Ted Nugent wrote a variation of the quote and attributed it to Reagan in an Op-Ed in Human Events, on April 27, 2010, supporting Arizona’s violent border policies, referring to Arpaio as an, “American hero”, and supporting feeding rotten meat to detained, suffering migrants. Shortly thereafter, I first found Walberg using the bogus Reagan quote as justification for his own positions.

August 15, 1988 - Republican National Convention - New Orleans, LA
At the 1988 GOP convention Reagan used the words as a refrain, and attributed it to John Adams. The saying, and its variations predated even John Adams. So, Walberg [and his campaign] were especially short-sighted, and factually lax to attribute it to Reagan.

2)    Falsely claimed in 2017 that constituents don’t mention Russia concerns to him
http://www.takecaretim.com/2018/07/walberg-lying-that-constituents-dont.html

The CBO & Planned Parenthood: Lied that a lobbyist document was made by the CBO
http://www.takecaretim.com/2018/07/investigation-walberg-lies-to-us-about.html

The CBO & the Affordable Care Act:Lied that a GOP health care chart was made by the CBO
http://www.takecaretim.com/2018/07/walberg-lied-to-us-where-health-care.html

Walberg’s Own Father: Lied for years that his father was an immigrant
http://www.takecaretim.com/2018/07/tim-walberg-has-lied-about-his-father_19.html