Link to formatted, printable pdf of this report: https://drive.google.com/file/d/1lFkS2g0nt-GHrQZwu1g5H8SHH2PVDLOu/view?usp=sharing 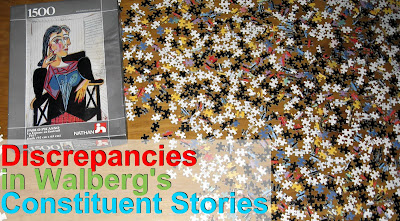 Which constituents does Walberg ignore, and which does he respond to?

I have previously reported how Walberg lies about the questions that we ask him at coffee hours: http://www.takecaretim.com/2018/07/walberg-lying-that-constituents-dont.html

This report explores three constituent stories from the public record, that Walberg took an active interest in. Each story starts in 2013, concerning the Affordable Care Act (ACA):

This report does not identify those constituents or examine their personal lives in any way. I have removed some of the identifying features regarding “J.B.”, who became subjected to a lot of national scrutiny. I am only interested in Walberg’s involvement with their stories.

There is a large discrepancy, in that Walberg did not have a town hall the previous day. At the time, it had been a little over three weeks since his previous town hall. If Walberg did indeed speak with anyone named Bill, it was not in a Town Hall. Furthermore, the U.S. House of Representatives was in session that previous day. 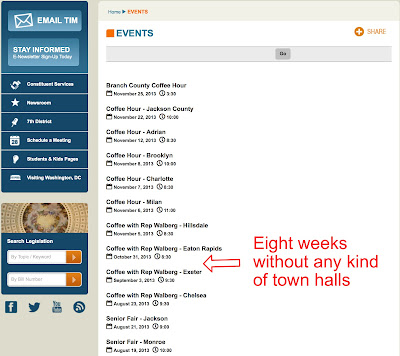 As the record shows, Walberg held no town halls within weeks of those dates.

“Bill” from Monroe, MI and “Lady in Tears” from Jackson, MI

With the speech above, we switch our focus now to Walberg’s story of the “Lady in Tears”, who he first spoke publicly about in June, 2013.

How did Walberg expect the IRS to help with any of this? The IRS did not make the health care law, nor are they the ones who cut back “Lady in tears’” work hours.

Discrepancies in when Walberg said he heard from “Lady in Tears”:

^See August 9, 2017, for Walberg’s contradiction regarding the woman’s children.

SIDE NOTE: 😀Walberg Often Grins, Laughs, or Tells jokes about Violence and Suffering😀

From this point, we jump ahead four years, to hear if Walberg has included any new developments in his story of the “Lady in Tears”.

ANALYSIS: Walberg’s “Lady in Tears” Story
In telling her story for four years, Walberg has depicted himself as just a passive onlooker, and not a powerful U.S. lawmaker. Why has the story not developed in that time, other than a ^contradiction with the age and number of the woman’s children? His story has kept the woman trapped in the same perilous spot for years, with no help from her lawmaker.

Has Walberg ever reached out to her in the past four years to help? Or, does Tim Walberg only care about her story as a political tool to attack our health care system?

The final constituent story that we will look at started in December 2013, when Walberg wrote an opinion article about, “J.B.”, in her local Dexter, Michigan newspaper. 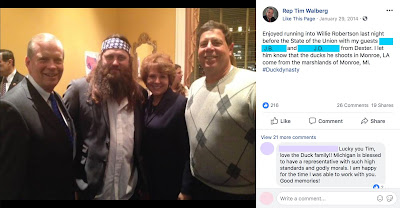 PAC Ad Campaign, & National Criticism of “J.B.’s” Story:
Shortly after Walberg invited ”J.B.” to the State of the Union address, she appeared in a series of televised ads opposing Senate candidate, Gary Peters. She spoke on camera, with her full name, about her misgivings toward the Affordable Care Act, and Gary Peters’ support for the law. Those ads were produced by “Americans for Prosperity” (AFP), a PAC founded by oil & chemical tycoons, The Koch Brothers. AFP also ran a social media campaign for several months featuring “J.B.”. During that time, she was also invited onto several TV news talk shows.

On February 20, The Washington Post published an article fact-checking the AFP ad. The article prompted other outlets to follow up [next page]. The next month, AFP ran new ads, which the Washington Post published a second fact-checking report on March 11. It featured a more in-depth comparison between the health plans that “J.B.” had before and after the ACA. On April 7, a fellow of the National Institute of Health conducted an extensive analysis of “J.B.’s” case, and The Washington Post updated their article with that information, and it concluded by giving AFP’s ad a more critical “Pinocchio Rating” than their first report had given.

The Washington Post debunked all of the biggest claims from Walberg’s Op-Ed: 1) “J.B.” did find a new health care plan – 2) she did get to keep her doctor – 3) the total cost of her new premium and her drugs is less than the cost of her old premium alone.

ANALYSIS: Walberg’s “J.B.” Story
“J.B.” was nowhere near 29 years old at that time, and Walberg certainly knew that.

Notice how Walberg said this just ten days after The Washington Post published their second fact-checking report about the AFP ads featuring “J.B.”. So Walberg, rather than accepting facts and letting go of his favorite anecdote to attack the ACA, or directly challenging the report; decided to continue telling a false version of “J.B.’s” story, but left her name out of it. That anonymity shielded Walberg from criticism for telling falsehoods. However, “J.B.” herself still faced that criticism, and was not afforded that anonymity.

Walberg brought her into the spotlight with those falsehoods, and continued to lie about her story for political gain. Yet, cowardly, Walberg never stepped up, or spoke on the record to take any responsibility, or to defend her from criticism.

About nine months later, marking about one year after he first wrote his Dexter op-ed, Walberg mentioned “J.B.” again by name during a rant in a committee hearing. It was the last time that I can find that Walberg publicly spoke about her.

Notice how Walberg avoided making any of the specific claims that he had made before about “J.B.”: finding a new plan, keeping her doctor, or coverage for her medications. Then he closed out her chapter in the most tactless manner, by saying, “she’s not stupid”.

Now, let’s reflect on the questions from the introduction:


The first time that I ever visited Walberg’s district office, was on February 3, 2017, with a small group of people to express our concerns about the GOP’s plan to repeal the ACA. That afternoon, men and women told their personal stories in tears to Walberg’s District Director, Stephen Rajzer, how the ACA had saved their lives, as well as lives in their families.

Why did their tearful stories never enter into Walberg’s repertoire of anecdotes?

Evidently, Walberg is only interested in constituents whose stories fit with his existing set of positions, and those of his political party.


Early in this research, I suspected that Walberg might have made up those three constituent stories from scratch. Happily, my suspicions were not borne out by the evidence. However:

While not fictional people, their stories became fictionalized at the hands of Tim Walberg.

I believe that all three of those constituents reached out to their Congress member, seeking help with their real concerns and grievances about the strange new health care law. For their part, it was a proper course of action.

For Walberg’s part, rather than help those constituents work through and resolve their specific issues, or take their genuine concerns and stories to Congress in a truthful, collaborative, and solutions-driven manner:

Instead, Walberg lied to Congress twice about speaking with “Bill” at a town hall.
Instead, Walberg has told conflicting versions of the “Lady in Tears” story for four years to attack the ACA, with no indication that he ever worked to help her situation.
Instead, Walberg welcomed “J.B.” into the spotlight and auspices of the Koch Brothers, which subjected her to national criticism for falsehoods, from which Walberg shielded himself.

Instead, Walberg ignores tears of constituents, whose stories don’t suit him politically.