Link to formatted, printable pdf of this report: https://drive.google.com/file/d/1ZLnznZ0pXljNM3UGLKs1RTscHPXidCdy/view?usp=sharing

Our U.S. Congress member, Tim Walberg has almost always voiced support for public schools, while undermining them in favor of religious, and private schools. Walberg attempts to blur the definitions of various types of schools to allow private and religious schools to become eligible for public school money, without abiding by the same legal standards and obligations that public schools uphold. Walberg has also lied about charter schools, and school choice to deflect criticism. That is what happened at a Coffee Hour event in October 2017, when a constituent asked Walberg about Betsy DeVos’s agenda with charter schools. In response to our fellow constituent’s question, Walberg cited a non-existent House Committee meeting, in which he claimed to have asked DeVos if school choice is part of her agenda.

That lie of Walberg’s prompted this report, which consists of three parts:

PART 1: What Committee Hearing?
-      How Walberg lied to us about questioning DeVos in a House committee hearing

At a town hall event in October 2017, our U.S. Congress member, Tim Walberg told us that he had asked Betsy DeVos in an Education Committee meeting if she was proposing any school choice legislation, and that DeVos had answered no.

So, Walberg wanted us to believe that Betsy DeVos was not promoting any School Choice, or Charter School legislation. Also, as a House Education Committee member, Walberg claimed to have personally questioned DeVos about those things in a hearing, and was satisfied after DeVos told him that she was not pushing that agenda.

Anyone who has been to Walberg’s official House webpage, would have noticed Walberg’s misdirection at that coffee hour, because he has always pushed for School Choice legislation. To this day, his official House webpage still lists School Choice among his legislative priorities. As recently as 2016, Walberg still listed expansion of Charter Schools among the legislation he was proud of. 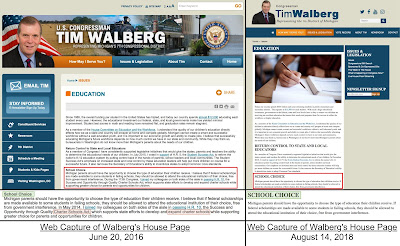 In the time between becoming the U.S. Secretary of Education, and the Coffee Hour in Grand Ledge, Betsy DeVos did not appear in front of any hearings with the House Committee on Education and the Workforce, or any other public hearings with Tim Walberg in 2017.

So, Walberg lied to us about that committee hearing. It never took place.

The closest thing was on January 12, 2017, when Walberg gave a House floor speech to endorse, and encourage the Senate confirmation of Betsy DeVos. In that speech Walberg based his reasons to confirm DeVos on her promotion of both “giving families choices”, and “access” to education outlets other than public schools; with the inference being charter and parochial (religious) schools.

Notice how Walberg tossed in, “including public schools” as a sort of twiddling caboose to his main objective: “access to quality education”.

“Access to quality education” is one of a number of recent political euphemisms for “charter schools”, and “school choice”, to allow people like Walberg and DeVos to talk about those polarizing topics without upsetting large swaths of their constituencies.

For example, the Politico report below describes how DeVos met with Frank Luntz to reframe her messaging, and specifically replace the term, “school choice” with other terms. So, perhaps Walberg was speaking euphemistically, when he told us that DeVos was not pushing for “school choice”:
https://www.politico.com/story/2018/02/07/betsy-devos-school-choice-education-397633

Throughout his entire political career, starting in 1983, Walberg has demonstrated an aversion to public schools. Prior to his first successful run, Walberg campaigned for a seat on his local school board. Walberg spent 4 years and 5 months, the majority of his time in college, on his Christian Education majors. Shortly after taking public office for the first time, Walberg pulled his own kids out of public school. Walberg was a member of the Michigan House Education Committee. So, it was a strange move for someone in Walberg’s position, and it made news nationally.


After Walberg left the Michigan legislature, he immediately got to work as President of the Warren Reuther Center for Education and Community Impact, Inc.It was registered as a charitable organization with a broad set of goals centered around education. An amendment was filed about 11 months after the original articles of incorporation, to describe the organization’s purpose in more broad terms, which no longer included public schools.

Walberg was the President of the Warren Reuther Center from January 1999, until about August 2000.

In 2000, as President of the Warren Reuther Center, Walberg wrote this newspaper op-ed in favor of school vouchers, and the DeVos family’s “Kids First! Yes!” ballot initiative.

This editorial also contains some of the most explicit attacks on public schools that I’ve seen from Walberg. He repeatedly refers to public schools as “government schools”, part of a “monopolistic system” run by “special interests”, who are “terrified” at the prospect of parents having choices in schools. Walberg’s description is similar to his quote from the 1986 article where he describes public school administrators as more interested in “protecting their turf”, than the well-being of kids.

Walberg opposed Affirmative Action, or Diversity Standards for colleges that receive tax funds, by spinning those standards as “Racial Preferences”.

At the time Walberg put out this ad, he was working for his alma mater Moody Bible Institute, and with the Board of Advisors for Betsy DeVos’s PAC, Great Lakes Education Project (GLEP).

In 2008, Walberg was the only Member of the House Education committee to vote against the Head Start program because he believed it prevented Christian Schools from discriminating against hiring teachers who were Muslims and Witches.

Walberg currently calls the Special Counsel on Russian election interference a “Witch Hunt”. In 2008 though, Walberg supported the government-sponsored disenfranchisement of witches and minority non-Christian religions from jobs and schools. By measures of hatred, shunning is nicer than hunting. So, there’s that.

I might be out on a limb here, but this House Floor speech inclines me to suspect that Walberg wants to push for legislation to expand charter schools.

Seven months after Walberg had lied to us about questioning DeVos in a committee hearing, he finally had the chance to do what he had already told us that he had done. On May 22, 2018, Betsy DeVos sat in front of Walberg in a House Committee Hearing for the first time. Buried amongst all of his flattery, Walberg only asked DeVos one question in that hearing.

In that hearing, Tim Walberg and Betsy DeVos described in general terms that their relationship had gone back “over the years”, and a “number of decades”. I found documentation showing from at least 2001 through 2006, Walberg was a member of the Board of Advisors for Great Lakes Education Project (GLEP). GLEP is a school-choice PAC, founded by Betsy DeVos, and her husband Dick DeVos. The DeVos family made their fortune running Amway, a business that contorted through all the legal loopholes to avoid being busted as an illegal pyramid scheme.

It is unclear whether or not Walberg had received any financial compensation for his work on GLEP’s Advisory Board. His 2006 financial disclosure form only shows income from Moody Bible Institute, and from his pension from Michigan’s State Legislature.

GLEP is still around, and it is not the only school choice PAC that Betsy DeVos created. In 2003, she and her husband started All Children Matter, which broke campaign finance laws and failed to register as a PAC in some states. All Children Matter was then dissolved between GLEP and the new organization that they started. In 2010, Betsy DeVos started and ran American Federation for Children, which promoted voucher programs and charters schools across the country. DeVos continued running that organization until she got the job as U.S. Secretary of Education.

The first job that Walberg got, after 16 years in the Michigan legislature [Jan 12, 1983 – Dec 22, 1998] was as the President of the Warren Reuther Center for Education and Community Impact. Walberg had that job from January 1999, until about August 2000. There are a few articles from 1998, where Walberg mentioned that he planned to use his experience at the Reuther Center to support a future political run for Michigan’s State Board of Education. During Walberg’s time at the Reuther Center, he hosted a debate on school vouchers, and helped to promote the DeVos - led, “Kids First! Yes!” ballot initiative for school vouchers. That ballot initiative was overwhelmingly rejected by the fine people of Michigan [69% - 31%].

Shortly before that vote, in August 2000, Walberg was relieved of his position as President, and Warren Reuther announced the center’s suspension of operations due to the poor management of its finances [Article: Center Struggles to Survive – Daily Telegram; August 3, 2000]. Walberg spent the next five years working for Moody Bible Institute, and on the board for DeVos’s GLEP organization.

Over the years the DeVos family has contributed 104 times to Tim Walberg’s campaigns totaling $159,500. In units of new cars, that is enough money for a new Aston Martin Vantage [starting MSRP: $106,125, source: CarAndDriver.com], plus a 2019 Ford Fusion V6 Sport [starting MSRP: $40,015, source: Shop.Ford.com], which leaves $13,360 left over, which might pay for a new base model Nissan Versa. Or, that money could also cover at least three public school teachers’ salaries for a year.

Contributions to Walberg’s campaigns from the DeVos family [Source: FollowTheMoney.Org]

Those contributions only account for individual FEC filings. Betsy DeVos’s school choice PACs have actively boosted Walberg over the years as well. Notice how GLEP gives Walberg and Bishop two exclamation marks, which is one more than the number of questions Walberg asked DeVos in the House committee hearing: 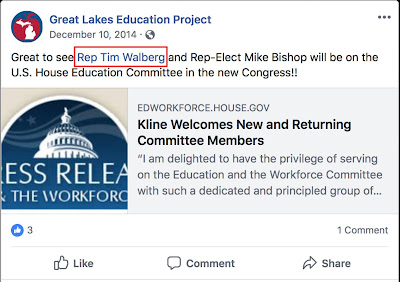 I would like to find more documentation related to these topics. What I have found so far shows that Walberg has worked against the interest of public schools over his entire political career. It has gotten to the point now, where Walberg will brazenly lie to our faces to deflect and cover for his intentions.
at September 01, 2018