Our U.S. Congressional candidates, as well as local State candidates will be attending a forum at Monroe County Community College, on September 11, 2018 from 7:00 pm to 9:00 pm.

Since Tim Walberg has not held a Coffee Hour event in nearly four months, and even the ones he did have were given such short notice, and were almost always held during working hours, and the written questions were pre-screened by moderators that his office had selected: This will essentially be the first open public forum, where Walberg's office and party don't dictate the flow of information, that he has attended in about two years. That last one was a candidate forum hosted by The NAACP in Adrian in October 2016. Here is the link to video from it:

Here are a few notable time stamps from the video of that NAACP event:
There probably will not be much time for the general public to ask questions, but it's still the best thing that has come around in years.

Here is the official Press Release with more information on the upcoming forum in Monroe: 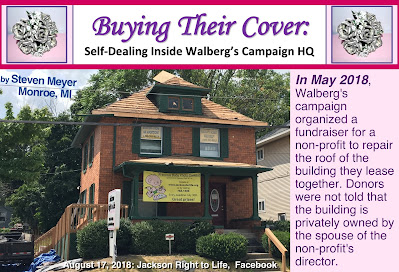