Walberg Claims He Was a Police Officer

Link To Formatted, Printable PDF of this Report:
https://drive.google.com/file/d/1ChsmzpekI64h80dXST_3D4sgAfEsmNN7/view?usp=sharing

An October 5, 2017 CBS News article mentioned that U.S. Congress Member Tim Walberg “served on a police force in grad school”. I was blindsided by that item because I had been doing a lot of research on Walberg’s college record, and had never read anything about him serving on a police force. I sent a message to the author of that article seeking more information, and never heard back.

Then I called Walberg’s Jackson Office and spoke with his staffer Leeann Yamakawa on October 10th. In a prior call, Leeann had told me that she has known Walberg for years. So I figured Leeann would know some information to clarify what the article said. She was not familiar with any experience like the article described, and could not confirm or dispel what the article had said.

I reviewed dozens of official biographical sketches of Waberg from over his entire political career. Work experience on a police force work was never mentioned in any written profiles for Walberg. I figured that kind of experience would be highly beneficial for a politician to highlight up front. I hadn’t found anything like it in print.

Then I found three videos from 2010 of Walberg making the claim first hand during campaign events. Then at a Coffee Hour in April 2018, Walberg went into a little more detail. A few days later I had the chance to personally ask Walberg more about it. Walberg told me that he was a public police officer for a municipality on the west side of Chicago. He refused to tell me which municipality it was though.

While I find Walberg’s claims highly dubious, I have not been able to corroborate or dispel any of them. I would like to resolve the question before the next election. I have been working at it, and have some leads, but I worry about being able to answer it in time. I would like to have more eyes on it, and hopefully some professional reporters will look into it. So I lay this out now as an open question: What are the facts behind Walberg’s following claims? 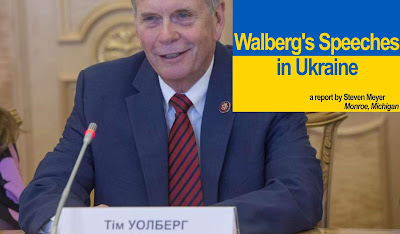